There have been a few thoughtfully developed documentaries commissioned and videos created to educate US about the buildup and dangers in the size of our Debt.

Overdraft – Published on Aug 27, 2012 is a public television documentary sponsored by the Travelers Institute that presents a compelling explanation of America’s federal debt crisis, how it impacts American’s lives, and choices to address the problem.

How the Lobbyists Rule America – Steve Kroft, of CBS 60 Minutes, exposes why the US pays the highest amount of money for prescription drugs in the world and why the US can not import cheaper drugs which adds to US Debt. It’s because Lobbyists for the pharmaceutical industry spend millions of dollars on Elected Politicians and either hire them later as employees or lobbyists. They did this and other things when Elected Politicians voted to pass over a $500 billion piece of legislation that benefited the pharmaceutical industry and Elected Politicians to the detriment of US Taxpayers and resulted in an increase in the Debt.

The Lobbyist’s Playbook – Jack Abramoff – Crooked lobbyist and convicted felon, Jack Abramoff explains how he asserted his influence to Elected Politicians in Congress for years, and how such corruption continues today despite ethics reform. Lesley Stahl, CBS 60 Minutes reports.

Abramoff discloses how easy and cheap it was to bribe Elected Politicians and how he used the Tax Code to avoid paying taxes. 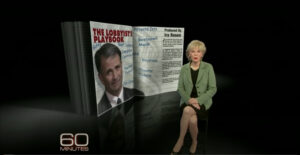 The Pledge: Grover Norquist’s hold on the GOP – Steve Kroft, takes a look at Grover Norquist, the man many blame for holding up the deficit-reduction process because of the anti-tax pledges he has obtained from nearly all the Republican politicians in Washington. CBS 60 Minutes

Norquist threatened to work against the reelection of any Elected Politician who violates their pledge, regardless of the economic consequences to the US.

Congress Trading Stock on Insider Information – Steve Kroft, of CBS 60 Minutes, reports that Elected Politicians in Congress can legally trade stock based on material, non-public information – a federal criminal offense for anyone else.

The Federal Debt – All You Need to Know in Three Minutes

Trump’s Committment to Teen on Debt