Millennials – Inherited Debt: Millennials Will Owe Millions While Baby Boomers Have Had A Breeze 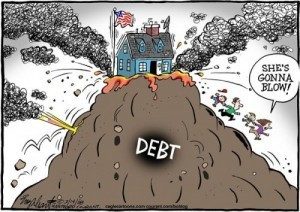 An open letter to millennials by Morgan Ortagus and Matthew A. Swift.

To Our Fellow Millennials:

We know you are likely busy working your second job or maybe getting ready for your final year of graduate school, but hear us out. We have a looming debt crisis in this country—and before you yawn and think this is a politician’s problem, we want to explain how truly dire this situation has become, and why it’s relevant to you.

Instead of platitudes offered by politicians suggesting a “conversation” about spending and entitlement programs, we are writing to declare a national emergency on the debt – a call to all millennials to take action. We won’t sugar coat it: we have inherited an utter mess from our parents, and neither party is really working together on a solution. While some of our generation are starting to get married, to have children, and hopefully financing their first homes, the rest of us are probably working two jobs in order to keep up with the huge burden of student loans and exploding healthcare insurance costs. That’s for those millennials who can actually find a job and aren’t sleeping on their best friend’s couch.

We get it: we’re all sick of politics and empty promises. But while we’re figuring out our future, our parents’ generation are “making it rain” like it’s pre-financial crisis in a west Chelsea club. Is there a single one of us that thinks social security will be around when we need it? You might have laughed as you read that, but the joke’s on us, millennials, and we need to take action. Did you know that in addition to paying off your student loan for the art history major that seemed so practical at the time, your family’s share of the national debt and America’s unfunded liabilities is ONE MILLION DOLLARS? Yes, you read that right― per family.

While we get that many of you like Bernie Sanders for his authenticity (he is the O.G. Brooklyn hipster), promises of free education and free healthcare from the “liberal progressive” are completely bogus. And don’t worry; we have plenty of criticism for the Republicans, too. But it’s a total farce—there is no magic fairy to pay for any of this.

Forget new spending; let’s talk about what’s on the books right now—while discretionary spending is flat, mandatory spending (i.e. things we pay for now in our taxes but will get to use ourselves like social security, Medicare and Medicaid) is skyrocketing. A full 35{2d289d1d5a885a9d806b39988d2a6cc01583b92dbc3439bbfc6e618f5df7dfd3} of our current budget is being borrowed—yes friends, that’s being added to our inherited debt. And while low interest rates make it an awesome time to finance a house, unfortunately, they will inevitably go up. In the next decade, if rates rise to 5.5{2d289d1d5a885a9d806b39988d2a6cc01583b92dbc3439bbfc6e618f5df7dfd3} (a 50-year average) we will be paying ONE TRILLION in interest payments alone!

One day, we’re going to be in charge of this country, and if we don’t start demanding accountability and transparency, what we inherit will make the Greek debt crisis look like child’s play. As growing interest payments on our national debt begin to consume more of the national budget, less money will be allocated to our military, infrastructure, and education system. We aren’t joking when we say this is an emergency—very soon our national debt and spending problems will create another financial crisis.

So what do we need to do?

Demand an accountable and transparent budgeting process. Demand social security, Medicare, and Medicaid reform. Demand politicians give us real plans for how they will pay for their latest shopping spree.

Some politicians, like former Fortune 500 CEO and US Senator David Perdue of Georgia and Senator Ben Cardin of Maryland, are ahead of the curve in sounding the alarm. But until our next President and leaders of Congress take them seriously, the patient remains on life support while the nurse is on a smoke break. Remember the bi-partisan commission Simpson-Bowles that was supposed to provide America with a roadmap for financial reform? Unsurprisingly, the baby boomers couldn’t sit in the room long enough to agree to a single recommendation. On Monday, September 19th, the authors will be sitting down with four U.S. Senators at the 2016 Concordia Summit in New York City, and will be challenging them for solutions and answers to the debt issue.

The baby boomers themselves expect millennials to sacrifice our standard of living in order to pick up the tab for their generation’s exorbitant spending. Both candidates for president should prepare realistic and viable plan to decrease spending. At some point, this merry-go-round is going to stop, and the buck will inevitably stop with us.

So in 2016, let’s take a pledge to no longer fall victim to the promises of cynical politicians who downplay the gravity of our situation. We’re smarter than that. We’ve both have spent a great deal of time in Washington and we have bad news—they aren’t smarter than us. In fact, they seem to be willfully neglecting our future with their spending habits.

This election is a challenge to the status-quo. That is great because the status quo is truly unacceptable. Let’s take the future into our hands now, by demanding politicians curb outlandish spending and come to real, meaningful compromise on the national debt—before it’s too late.

The views of the authors are their own and not those of their respective organizations.

Morgan Ortagus is the National Co-Chair of Maverick PAC and the former U.S. Treasury Attaché to Saudi Arabia.

Matthew A. Swift is the Co-Founder, Chairman, and CEO of Concordia and the Founder of Opportunity.us.