For many Americans, the national debt—now approaching $30 trillion—is an afterthought that must always take a backseat to the social and economic problems of the day. Now, it’s the COVID-19 pandemic and recovery. Before that, it was the 2008 recession. Before that, wars in Iraq and Afghanistan. While people are suffering, who can be so callous as to think of debt problems? Future generations can deal with that, right?

But what if I told you that the best evidence available today shows that the growing national debt contributes to massive problems that many on the Left and Right care about, including wealth inequality, poverty and economic stagnation?

On the surface, the link between the debt crisis and poverty seems complicated and unintuitive, but once you take a minute to think it through, the issue actually becomes rather clear.

When the government spends more money than it takes in over several decades and rapidly increases the national debt, as it is doing now, two important things happen. First, more money flows into the economy through government programs—sending tens of millions of Americans checks for $1,400, for example. And second, the Federal Reserve sets interest rates to ultra-low levels to help the national government finance its deficit spending.

Without the Federal Reserve lowering interest rates—the current interest rate set by the Fed is nearly 0 percent—the national government could never afford to spend trillions more than it takes in over the long run, because the resulting interest payments would consume so much of the government’s future budgets that it would be completely incapable of functioning properly.

Although lower-income and some middle-income families benefit temporarily from certain government spending programs and low interest rates, the long-term effect is inflation, which drives up prices and makes it difficult for lower-income Americans to amass wealth and move out of poverty. This is especially problematic when the government prints new dollars to give to Americans who have not lost their jobs or had their incomes lowered—a key element of previous COVID-19 relief packages as well as the one now being discussed in Congress.

When people talk about inflation, they have a tendency to think of inflation occurring equally across an entire economy, but economists have long known that price inflation often varies by industry. Over the past three decades, many of the industries most dependent on consumer lending have been the ones that have experienced the greatest amount of inflation.

Similarly, the average cost of a new car and college tuition have also increased dramatically. The primary drivers in all of these cases have been government spending and low interest rates created by the Fed. 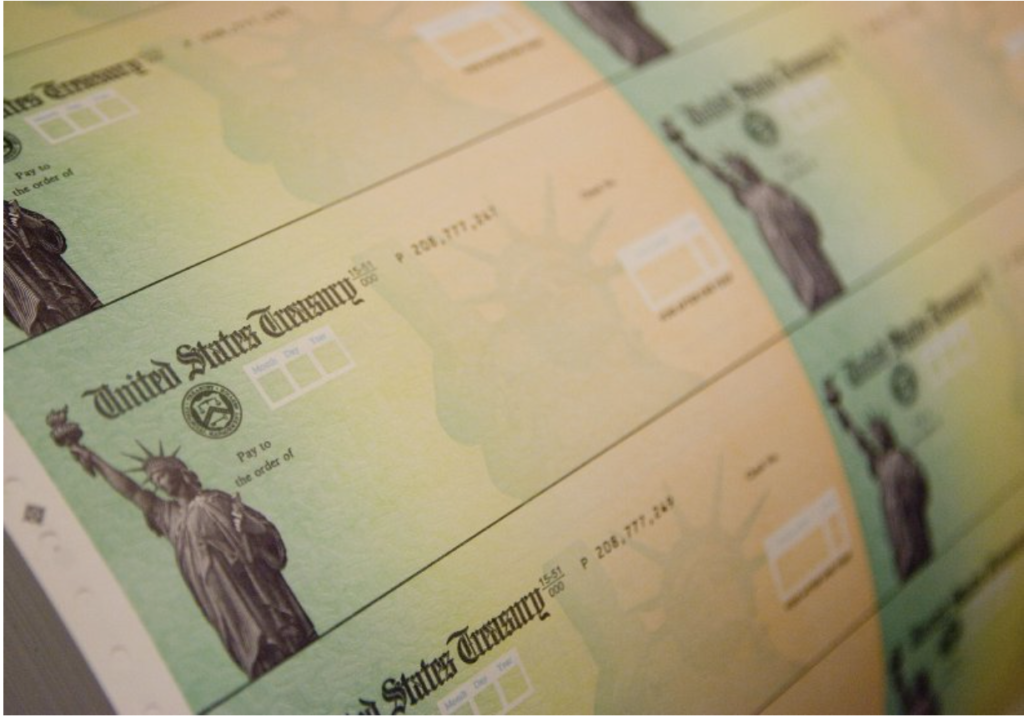 Stimulus checks being prepared for printing in May 2008 in Philadelphia, Pennsylvania. A $600 stimulus payment issued in January as a prepaid debit card was reported to have vanished when a resident attempted to transfer the payment to his bank account.

It is middle-class and lower-income Americans who are hurt the most by these cost increases.

Wall Street tycoons, investors and large corporations, on the other hand, benefit tremendously from lower interest rates and big government spending programs. They use low interest rates to amass even larger fortunes by gaining access to ever greater loan amounts, because banks are much more willing to lend when the Fed sets low interest rates.

Wall Street and many corporations also benefit from the government pumping money into the economy, because much of that money ends up in the stock market, sending stock prices higher even during the most chaotic economic times. In addition, consumers tend to use stimulus money on high-priced items offered by large corporations.

The problem has only become much worse in the post-coronavirus economy, which has undoubtedly benefited gigantic corporations like Amazon the most, while crushing smaller businesses and entrepreneurs across the United States.

These problems are going to continue to get worse over time, unless the national government reverses course and only spends money on programs and policies that are absolutely essential—the exact opposite of President Joe Biden‘s current proposal to fix the economy.

If the national government were to reduce spending over time, deficits would decrease and interest rates and inflation could return to normal levels.

After all, it does little good to send lower-income Americans checks for $1,400 if the average cost of homes, cars and college degrees increase by tens of thousands of dollars every five to 10 years.

Justin Haskins is the Editorial Director and a Research Fellow at the Heartland Institute.

The views expressed in this article are the writer’s own.